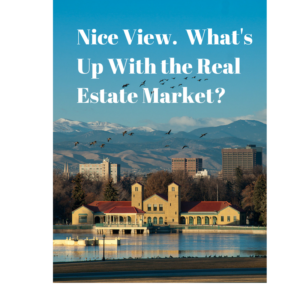 For two years, everyone has been asking me whether I expect a housing bubble to occur in Denver. Like any market, it will have to drop or plateau eventually. No commodity enjoys a steady increase until the end of time.

In the meantime, I come across a lot of articles and blog posts making some pretty broad claims about the Denver real estate market. The ideas are not necessarily wrong, but there’s more to the story.

So, why should I just read this stuff over breakfast and roll my eyes, when I can share what I know with all of you?  I’m going to burst some of these bubbles, but not without a quick review of Economics 101.

Supply and Demand; Part 2: We still have a lot of demand. People are moving to Denver at record rates. Denver consistently is rated as a top city for job-seekers, a top city to start a business, a top city for IT job-seekers, a top city for young people, and the list goes on. Based on historical trends, the U.S. Census Bureau estimates that an average of 50,000 people will continue to move to Denver on a yearly basis.  Demand isn’t likely to go down; there is a limit to how quickly builders can build and many builders won’t want to over-speculate this soon after the recession. Therefore, we are likely to continue to have a demand greater demand than supply.

Our Local Economy: The Denver metro area economy is diverse and consistently growing. I read a blog post recently saying that “Denver is just a boom town and will fail like Detroit.” Doubtful. Detroit depended primarily on the auto industry; they did not have a diversified economy. Denver has a variety of industries which are flourishing.

As mentioned in every article about Denver for the past few years, we have weed. We have tourism, for the mountains… and for the weed. This keeps our restaurants full, our hotels full, keeps people shopping in our stores, drinking in our bars, and smoking our weed. We have tons of tech companies, most of which are growing, including a new Google campus which is coming soon in Boulder. We have an ever-growing clean energy industry. (On the flip side, we have a quite a lot of oil and gas companies here in Colorado, although, this industry has recently taken a major hit and people have been losing jobs in oil and gas. Note: oil and gas only accounts for about 10% of our total industry.)

National Interest Rates:  They’re still pretty low. A lot people, including myself, thought interest rates would rise by the end of last year. We were wrong. As long as interest rates remain low, it will keep mortgage rates lower, even if the home price is higher, so people are still very interested in buying now. The Fed has been meeting to discuss raising interest rates and although a couple of folks are bulldogging to raise them, most members of the Fed are interested in keeping interest rates low for a considerable amount of time. If there is a rise in interest rates, it’s not expected to be a major rise for at least several years.

*Note: although this is dependent on your home price and monthly mortgage payment, overall, you will save a lot more money over the course of a 30-year-loan if you buy at a lower interest rate than if you wait around for home prices to drop. The highest likelihood of Denver home prices dropping is if interest rates rise, and that doesn’t necessarily mean that you will save money.

I’m ready to get really dorky. Let’s analyze some Denver real estate statistics, so I can justify that Master’s degree that’s stashed in my closet…

It’s likely that people with properties under $500,000 heard the news about how competitive it can be to find a home under $500,000; therefore, they are choosing not to sell at this time because they believe it will be difficult to find a replacement home. People selling properties over $500,000 don’t face as much market competition if they purchase a similarly priced replacement home in the Denver metro area, so perhaps people at that price point are simply selling their homes at a higher rate than people with homes priced under $500,000.

(This would explain a lot, because if these folks are simply moving within the metro area, then the seller’s home will go on the market, be purchased by a new buyer, and then the seller will buy a new home which likely also costs over $500,000, therefore resulting in two homes over $500,000 being sold. Generally, someone purchasing a home over $500,000 is less likely to be a first-time home-buyer, whereas someone purchasing a home under $500,000 is more likely to be a first-time home-buyer. A first-time home-buyer is someone who is no longer renting or living in mom’s basement, so they are only taking place in ONE real estate transaction. Buyers and sellers over the $500,000 price point are more likely to be participating in TWO real estate transactions, as such, creating a higher statistic of homes being sold over $500,000. In any case, although rapid appreciation is certainly real – we cannot simply assume that this statistic is indicative of purely of home price appreciation.)

I mean, hey… murder rates and ice cream sales both rise during the same time of year, but should we assume that ice cream causes murder?

Lets talk about some more statistics I’ve seen out there…

What I can tell you is that, yes, the neighborhood has appreciated… a lot! But it has not truly appreciated at a rate of 19% per year. If it were unadulterated appreciation, the homes would have just increased in price with no outside forces at play —–> which means you could have purchased a home five years ago, done absolutely no upgrades beyond necessary maintenance, and had your home value increase by 19% each year.

That would be awesome, but that’s not what’s happening here… I can tell you from living and working extensively in the 80205, this phenomenon can largely be explained by a human species called “A Fix-and Flipper.” As the traditionally posh neighborhoods in Denver remain out of reach for many, people move to up and coming neighborhoods where prices are more affordable. Home-flippers get hip to these trends and they start flipping in these neighborhoods knowing that they can make money on their investment.

I purchased my home in July of 2013 and in that time, 5 homes have been fixed and flipped within 2 blocks of my home. Therefore if someone bought these homes at $350,000, put some work into them, and sold them for $500,000 within the same year, it looks like prices are increasing rapidly. The statistics don’t control for fix and flips; they only show the overall numbers. When you see these dramatic statistics for Park Hill, Whittier, City Park West, and so forth… you’re not getting the whole story.

Similarly, when you purchase a home in Wash Park East or Country Club, that home is already going to be outfitted with luxury upgrades. There isn’t a whole lot one can do with a such a property to add value. It’s already a luxury home. It already has Viking appliances, a top of the line bathroom, and maybe a heated garage. It already has the best roof that money can buy. Therefore, the value increases for these homes will not be nearly as grandiose.

All in all, my advice is to not be too scared of the market. It possibly will plateau or maybe even drop at some point. (A lot of people who were afraid to buy two years ago, but if they would have bought then, their home values would have appreciated during that time. In the meantime, their rents have only gone up.) All commodities drop. And they usually go back up. If your home value drops, treat it like a stock and don’t sell when the market is down.

As a final note, from everything I’ve seen, I do expect rentals to continue to rise. If you are renting, but are fearful of buying a home, you should probably fear the opposite. Home prices may drop at some point, but rentals are likely to go up and up and up. In fact, if you’re looking to invest some money, I would strongly consider getting a rental property in Denver.

If you have any questions about the Denver housing market, are interested in buying a home, or would like to find out your home’s current value if you are considering selling, please call Allison Parks at 303-908-9873 or email her at allison@theconsciousgroup.com. We are Conscious Real Estate – the brokerage that loves our local and global community – contributing 10% of all realtor commissions to the nonprofit of our client’s choice in our efforts to change the world through real estate.