Maybe you have already heard of VORP, but I pride myself on knowing about all local nonprofits and I had not yet heard of this one, although they have been providing services to Denver youth for over 20 years. I was incredibly inspired by my visit and am grateful that my clients chose to donate to this wonderful organization, so that I could learn about this organization and contribute to their cause.

VORP stands for Victim Offender Reconciliation Program and they keep young people out of jail by restoring the relationships between oneself, one’s family, and one’s community. This is an alternative justice practice, which acknowledges individual experiences and identities. Have you ever heard of transformative justice?

Angell Perez, Executive Director of VORP, almost brought me to tears with the story of Julia…

Julia was a 12-year-old when she was referred to VORP from the Denver Juvenile Diversion Program after receiving a ticket for Assault and Interference with School Staff. She had been handcuffed, arrested, and expelled from her middle school, after spending 5 days in a local “juvenile jail.” Why? Because she got into a fight with another student and when a teacher tried to break it up, she was punched in the mouth by someone who she thought was Julia. Completely unacceptable, right? Sure… but there’s a lot more to the story.

For many months, Julia had been consistently bullied at school by several girls because she plays a lot of sports and dresses like a tomboy. Julia had sought help from several staff members at school and their advice was to “just ignore it.” One day, she finally lost it and got in a fight with one of the bullies. She had been having a terrible time at home. Six months prior, her father had passed away from cancer unexpectedly. Julia had been separated from her siblings, as they were all living with different relatives. She was worried about her little sister, who had been threatening suicide, and since they were separated, Julia could not be there for her. And so the events of Julia’s fight unfolded as they did.

VORP facilitated a Face2Face healing circle with Julia, her grandfather, and the teacher from school who pressed the charges, Ms. Audrey. Ms. Audrey was able to share how much hurt she experienced, both physically and emotionally. She shared that her daughters were students at the school, who saw her get assaulted and were afraid for their mother’s wellbeing. The incident caused so much harm to Ms. Audrey that she had considered leaving her career as a teacher, although she had become a teacher because she wanted to support youth in their education to lead them to better lives.

In this circle, Julia was able to face the harm that she had caused and was able to share her story with Ms. Audrey, so Ms. Audrey could understand the root of Julia’s anger and help her learn how to better deal with it. With the staff and volunteers of VORP, everyone was able to create empathy and understanding with one another.

Ms. Audrey praised VORP’s Transformative Justice Programs and vowed to advocate for calling VORP, instead of the police with school administrational issues. Ms. Audrey also committed to helping Julia get back into school after she had been expelled. Julia completed her community contract to make amends to Ms. Audrey, herself, and her family. She got back into school and finished the school year with all A’s and B’s.

The focus of Transformative Justice is to begin a journey of transformational healing for youth, families, and community by focusing on the root causes of harm (crime.) This is done by addressing generational wounds and trauma caused by societal oppression (racism, poverty, etc.) to inspire youth to empathize with survivors of crime and heal the harm they’ve caused them.

Transformative Justice also actively works to transform systems that cause harm to particular communities, especially communities of color, such as the school to prison pipeline, mass incarceration, and the prison industrial complex. VORP provided programs to 230 youth and their families in 2015. Over 90% were youth of color and 87% qualified for free or reduced lunch. 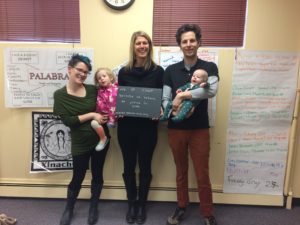 Pictured are Conscious Real Estate clients: Zoe, Patrick, Aster, and Oriole with myself

I am incredibly grateful to Zoe, Patrick, Aster, and Oriole for choosing VORP for their Conscious Real Estate donation, so I was able to meet Angell and learn about all of the wonderful work that VORP is doing in our community to help young people. We met with them on December 31, 2015 and I couldn’t ask for a more inspiring end to my year. As we were walking out, Zoe mentioned that one of her friends had recently purchased a home from another realtor and was bragging that her realtor had given them a new security system as a closing gift. Zoe responded to her friend, “Our donation to VORP is our security system.”

“We chose to give to VORP because we have seen an increasing pattern of people of color being sent to courts and jails at early ages. VORP sees the factors that schools and courts miss, like trauma, economic, and social factors that make youth more likely to end up in the correctional system. We believe in VORP’s holistic and transformative approach to justice as well as their leadership opportunities that support young people in changing our future.”

If you would like to learn more about VORP and their programs, click here. You can volunteer or donate to VORP or “like” them on Facebook. And as always, when you purchase or sell a home with Conscious Real Estate, 10% of our commission goes to the nonprofit of your choice and we are always more than happy to donate to such wonderful causes. I hope everyone’s new year is going well. – Allison